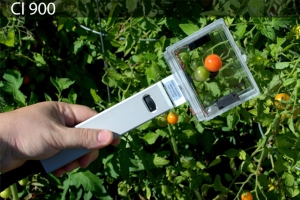 Consumers are increasing their expectations on fruit quality and availability. They are shopping more frequently and when they arrive at the supermarket it is a given that fruit is there ready to be consumed. Producers and wholesalers must meet this challenge of delivery “Ripe ‘n’ Ready” fruits to discerning consumers. With the assistance of precision scientific instruments, along with state of the art storage and transport capabilities, the challenge can be met.
Most types of fruits are harvested from the tree at a stage which is considered “commercial ready” but are not ready for safe consumption. Co-ordination of the supply and delivery chain must then deliver this commercial ready fruit on a supermarket shelf as a ripe ‘n’ ready fruit. Logistically, the challenge is greater as harvested fruit often travels vast distances from the farm to the supermarket shelf – including distances as far as Brazil to Australia.
We have long known from the times of the ancient Egyptians and the ancient Chinese that ripening of fruit can be hastened. This innate knowledge is best encapsulated with the idiom: “one bad apple spoils the barrel”. The exact chemical process was not known in ancient times and was only discovered by scientists in the 1930’s. It is now widely known that the chemical compound ethylene, or C2H4, causes fruit ripening. But suppliers of fruit do not necessarily need to hasten ripening, rather they need the ability to control the timing and speed of ripening. Therefore knowledge on how ethylene induces and hastens ripening, and the ability to measure this, is critical.
It is easy to overlook or forget in this age of highly packaged and marketed goods that fruit is actually a living organism. As with all living organisms, fruit undergoes respiration or the breakdown of complex organic chemicals into energy, water and simpler chemicals such as carbon dioxide. This is what fruit ripening actually is – the respiration of an organism that will eventually age, deteriorate, and die (or, more accurately for fruit, decompose to a state to give its seed the best chance at germination and survival into the next generation of plant).
Increasing the concentration of ethylene around fruit initiates and increases the respiration rate which in turn initiates the process of ripening. Citrus can be used as an example in using ethylene to control the ripening process in fruits. Ethylene can hasten the ripening of citrus however high concentrations can lead to accelerated senescence and physiological disorders. Ethylene concentrations for citrus ripening are in the order of 15 to 20 ppm (parts per million), however it can be as low as 1 to 2 ppm.
Precision scientific grade instruments that are easy to use and low cost are assisting producers and suppliers in monitoring and controlling ethylene concentration. The CI-900 Portable Ethylene Analyzer is an example instrument which can measure ethylene from 0 to 200 ppm at a resolution of 1 ppb (parts per billion) via an electrochemical cell.

Carbon dioxide, temperature and relative humidity can also be monitored with the CI-900. The instrument can be used to monitor individual fruits in warehouses, lab or field, or it can be used to atmospheric ethylene concentrations in cold storage or transport containers.
With precision scientific instruments, and the ability to efficiently transport fruit from the farm gate to the supermarket shelf, it is becoming increasingly easier to supply fruit in a perfect state ready for consumption.